Zuza Mengham is a London based sculptural artist and designer. Her current works of contemporary resin sculptures resemble exquisite prism-like gems illuminating light, colour, and form. It has been almost a year since I spoke to Zuza last (which I will take a little credit for as I do believe I have a knack for discovering new upcoming artist I like to call gems, pun intended) since then I have watched Zuza’s career blossom with recent collaborations such as Laboratory Perfumes creating sculptures as a physical interpretation for the brand’s gender-neutral fragrances, which where shown as Part of London Design Festival at the Conran shop Marleybone and later in Conran Paris. She has made a jewellery series which explores synthesising particular materials such as powdered copper and slate, allowing the natural density of each component or pigment to drop and rise creating spontaneously marbled colours, and her long term series of resin sculptures which explore ways of capturing elemental states using colour and manipulating the point of catalysis, are for sale in London in The The Store on Hackney Road. Her last show at The Chopping Block Gallery in London saw her explore the physical and historical premise of six materials in powdered form; Copper, Iron, Slate, Bronze, Marble and Salt.

Zuza Mengham is an unusual name tell us a little bit about your origin and background: My mums Polish and my dads English. I grew up in the UK and moved to London to study my sculpture BA eight years ago.

Your past projects seemed to have been large scale with strong aesthetic design in outdoor sculptures; interior light fixtures with predominate use of solid materials such as timber and steel when and how did the change and introduction your delicate works in resin come about? Metal work initially was what drew me in to sculpture and I loved to make large scale work which you could walk under or through. From working in steel I got really interested in playing around with as many materials as possible and quickly realized it was really important for me that sculpture should about craftsmanship and process. I think working in metal in the past was deeply tied in with ideas withing material use as it does resin in some ways. Steel needs to be manipulated quickly under immense heat; you have a small window of time and then the outcome is very permanent. This same interest in the momentary point of permanency is also fundamental in the way I work with resin, which I started seriously experimenting with around a year ago. I like that there are no secrets with it as a material, it offers itself and its process up freely and reminds you of the different material states it has evolved through. I think the reason I was previously drawn to metal was its deep tradition and the brief moment of malleability and its subsequent permanency, whereas resin presents itself with permanency, but with very little tradition. I don’t feel as predisposed by imagery. Explain your creative process and what inspires your colour and shape choices ? I always start with lots of drawing and research, so the studio is laid out in sequence. I’ll start at my big drawing desk, move on to the mold making desk, and finish in the casting area. If I’m lucky I can get stuck into one for a few hours, but often I’ll be moving around between pours and polishing and sanding, I guess it’s become pretty intuitive now. In terms of designing the work it really depends on whether it’s a collaboration or not. It can be pretty research intensive if I’m working with someone to their given themes, and if it’s a piece that’s for my own practice and part of a new series then I’ll often spend time drawing out ideas and sifting through imagery and looking at lots of color and form references. Often these come from architectural and interior design, 60’s steel artists, sci-fi, archeology, and natural imagery.

How has collaborating been influential and beneficial to you? I think it’s a great way to expand your own ideas of your work. It can get easy to get stuck in a rut and reiterate the same ideas over and over and stay in your safe zone. For me it’s been really interesting to see how the work can change in different environments and allow it to evolve with influences you might not have come to by yourself.

WHAT WOULD BE YOUR DREAM CREATIVE COLLABORATION: I don’t want to jinx it! But I’d love to do a series of lights or a sculptural headpiece for someone …right now I’m making a chair.

WHAT IS THE ONE THING YOU CANNOT LIVE WITHOUT IN YOUR STUDIO? Music! I cant work very well in the studio without my tunes on. Right now, I’ve got Giggs new album on repeat… Then resin and a life’s worth of sandpaper…

PROUDEST MOMENT: Staying up till 3am to watch a live stream of FKA Twigs perform in Baltimore with a crystal I made for her tour.

BEST ADVICE: Don’t waste your energy worrying too much. Just go for it, do what feels most fun, and makes sense to yourself. 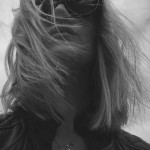 The idea of having great art accessible to a broad audience prompted the online gallery showcasing her own work, as well as a diverse range and ever-growing list of talented contributing artists.

Boe‘s passion is in discovering creative minds and understanding the finer nuances of their character which influence their process, inspiration, and art. Follow Boe Sapun and Écume Gallery on Instagram. Author Bill Morris on finding your “road to happy.”